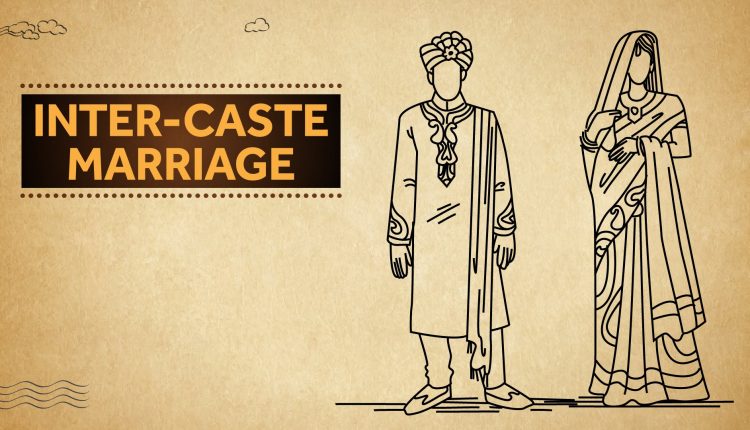 A few weeks back I was checking my emails, and I saw an email of a person who appreciated my blogs and wanted me to write a blog on inter-caste marriage. It is always the best moment when someone acknowledges you. I am thankful to that person for showing interest in my Blogs.

I usually write about topics which are inspired by what I see in the society, what I have experienced and what I want to change. Because I want to alter the thinking of people for me and my generations. I want my children to grow in an environment where people are more acceptable about things. That was my motive when I started writing the blogs. I am a pathetic writer, but I want to see my country as a place where people are more tolerant, groomed and liberal. I get disappointed when I look at people who despise each other for no reason. It upsets me when I see my country people on social media who are body shaming people, bashing them and saying awful crap about other people. That is what I want to transform, and the medium I found was blogging.

When I got the request to write on inter-caste marriage, I found out that it is also a problem that is subsisting in my society. It was very challenging for me to write something on it. Because I am not married, and I have not experienced it. So, I took interviews from different people who are married and who have married someone from a different caste. I am writing this blog based on whatever I have learned through reading about such people and by talking to them. What is a soulmate? It is a complicated term to be defined. Every person can define this term according to his/her knowledge and perception. The definition I got from Google was “a person ideally suited to another as a close friend or romantic partner.” Honestly speaking I don’t think that ideal exists in reality. For me, a soulmate is someone who can tolerate you the way you are and with whom you see yourself growing old. Or someone whom you can tolerate and accept him/her the way that person is. I have realized that the probability of finding this someone is extremely low. In most of the relationships, the partners are not soulmates. They are just living together because they are tied by the knot of the agreement which we call marriage in our society. I have a huge social circle, and I know a lot of people and a lot of men who are incredibly handsome, but I can’t imagine living for the rest of my life for 24 hours with most of them. Because I just can’t tolerate them. I assume that is because they are not the soulmates. I am not saying that I am sure that I will marry my soulmate maybe I marry a person who is not one but what I am trying to say is that probability of finding your soulmate is extremely low.

Now if we further categorize the humans on the basis of castes, religions, and cultures; the probability of discovering your perfect match in your religion, culture, and caste becomes hugely less. Because even if two people follow the same religion, have a similar culture or same caste that doesn’t predict that both are perfect for each other. Few things in this world are fixed, and some are variable. You can change the variables, but you cannot alter the fixed ones. I believe caste is a fixed characteristic, religion is semi-fixed because you can turn it, but again the probability that a person will change its religion is extremely low. Someone told me that religion is like your mother when you’re born you have your religion like your mother. And if someone says something against it you will not tolerate it. And leaving it means leaving your home. So, the majority of people are not ready to leave it not probably because they love it but because they love the relations, the house and the other things that are attached to it. The third one is a culture which is somewhat variable because it can be changed with time. As in the previous era, the culture of slavery was existing, but now it has changed. “Together by soul separated by caste” ~ Sandeep

When someone is born the person don’t choose his/her religion, culture or caste. So, the question is why to hate someone for something which the person has just got by a chance. I was discussing with my cousin about a tradition that is existing in Balochistan where people sell their daughters into marriage. My cousin said how lucky we are that we are born in good families. I said yes there was a 99.9% probability that you can be carried in that area. But the 0.1% occurred, and you’re born in this family. Same is true for the religion you got, the caste in which you’re born and the culture that you’re following. So why to hate someone for these things. It’s just a chance and the will of God that He selected the religion, culture, and caste you’re born with for you. I have seen many religious people condemning the people who are following religions that are different from theirs. I want to ask such people do you believe in God? Do you believe in what God chooses for you is right? Then how can you consider that God has made the wrong choice for other people? Or how can you condemn a person born in a religion that is different from yours? If you believe that God has control over life and death than believe that God has power over this too that in what family, religion, caste, culture a person will be born. Are you against God’s will? I have seen Hindues want to convert everybody into Hinduism, Muslim want everybody to be Muslim, Christian want everybody to be Christian, and the same goes for people who belong to other religion. But the question is that this is the will of God that they should get born in this religion why don’t we stop abhorring the other people for practicing something contrary. I met two girls who belonged to the central Punjab they said something that was very heartbreaking for me. They said we don’t understand Shias what kind of a religion they are following. Surprisingly those ladies were not converted into some other religion they were following the same religion as their parents, and I am sure if they were born in Shia families they must feel the same sentiments for Sunnis. I don’t blame them because I know that’s what their environment has cultivated in them.

There is no caste in blood ~ Edwin Arnold

The hatred is so much against other religions, castes,  and culture that we find it very difficult to get married to people who have dissimilar conviction. And the people who do something like this are contemplated as wrongdoers. Some are being killed by families in the name of honor killing. Some are thrown out of their families. I met a person a few days back who was telling me a story about his father and how his father has racist thoughts. He said to me that his father uses to justify his hatred for other castes by using the example of Dogs that even Dogs who belong to different breeds have very different characteristics. I don’t know what to say about this are we like dogs? It’s the nurture that develops these different characteristics. By nature, we get our physical appearances. When I was doing internship a few years back, I had a colleague who was Syed, and she believes that a true Syed should marry a pure Syed because if one partner is not Syed, the future generation becomes impure. I was speechless on this concept. Anyways there is a gigantic number of Syeds existing in the sub-continent that even in the Arab region you will not find so many of them. Therefore I hope that she might have found a pure Syed person by now.

Now I want to share the experience of people who have tied knots with someone who belongs to something dissimilar. People who are married to someone who has different beliefs or castes fight like normal couples. They live perfectly normal lives until and unless they try to convert the other person. The complexity increases if such people are living with their families. Because than families try to impose things on the person who has a different belief structure. Mostly the critical problem lies in what will children follow. Because we think that children cannot follow two things at a time, or they cannot understand both things. Yes, if there exists a war between whose belief structure is right, then this problem will exist. Both people will try to impose their beliefs on the children, and the kids will not understand anything. But if the children are taught the goods of both cultures than they will become phenomenal. Science says that children of people belonging to different cultures and religions are more intelligent than kids whose parents are from similar backgrounds.

So what will happen to the children in an inter-caste marriage? The answer is that they will become wiser and more intelligent.

Here are some tips to make an inter-caste marriage successful. I got these from different people who were married to someone who belongs to some other religion, caste or culture.

“Encourage inter-caste/inter-religion marriages, & one day there will exist no religion except humanity…”
~ Akansh Malik

That is what I have concluded from the experiences of different people. I hope I am a little bit successful in changing the perception of some people who hate people because they are different from them. Spread the love not hatred and if you have found your soulmate in someone who belongs to a different setting don’t hesitate to go for it. Because finding the best person to get married is not a piece of cake. Just keep the above things in mind when you are in a relationship with a person who belongs to a different environment. Nothing can go wrong when you’re in love, and it is the power of the love that’s why it’s magical.